“But he already has glasses!”  Even though we were separated by the phone, I could tell the mom thought I was crazy.   Her son wears glasses every day, and here I just recommended that she take him for a vision exam.

“But there’s more to vision than just needing glasses” I explained.  “He needs a COMPLETE vision exam, so we can see what’s going on”.

Now the mom’s voice was exasperated.  “What are you saying? The doctor did an incomplete exam?”

There are different kinds of eye care professionals and different models of treatment. Some doctors may only check the health of the eye and if the child needs glasses. Others also check eye movement and if the eyes work together.

Max was in the third grade.  He was diagnosed with ADHD but his meds just weren’t working.

“He ‘s in reading extra help and math extra help – but they’re not helping!?”

Mom’s mood changed from angry to confused to sad.

“He’s starting to hate school. I don’t know what to do!”

Unfortunately, this is pretty common for children with undiagnosed vision deficits. The parents get them glasses so they think they’ve crossed vision problems off the list.

But it’s just not true.

But there are a huge number of vision problems that may be impacting a child’s schoolwork. It’s really important that children have a complete eye exam. Not just finding out if they need glasses.

Binocular Vision Disorders  – when a child’s two eyes aren’t working together as a team.  This may include strabismus, convergence and divergence.  Binocular vision issues are more common in children with with learning disabilities, developmental delays.

Accommodative Disorders are also called Focusing Disorders. Children who struggle with looking from near to far and back again are among 5 to 6 percent of the general pediatric population (Scheiman, 2104).

Very often, children with vision difficulties display behaviors such as

These are also common symptoms of Attention Deficit Disorder.  So it’s sometimes hard to tell what exactly is going on with that student. 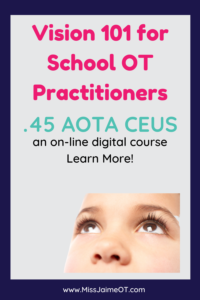 WHAT IS A COMPLETE EYE EXAM?

There are two models of vision:

The One Component Model of Vision:

The second, called the Three Component Model of Vision: 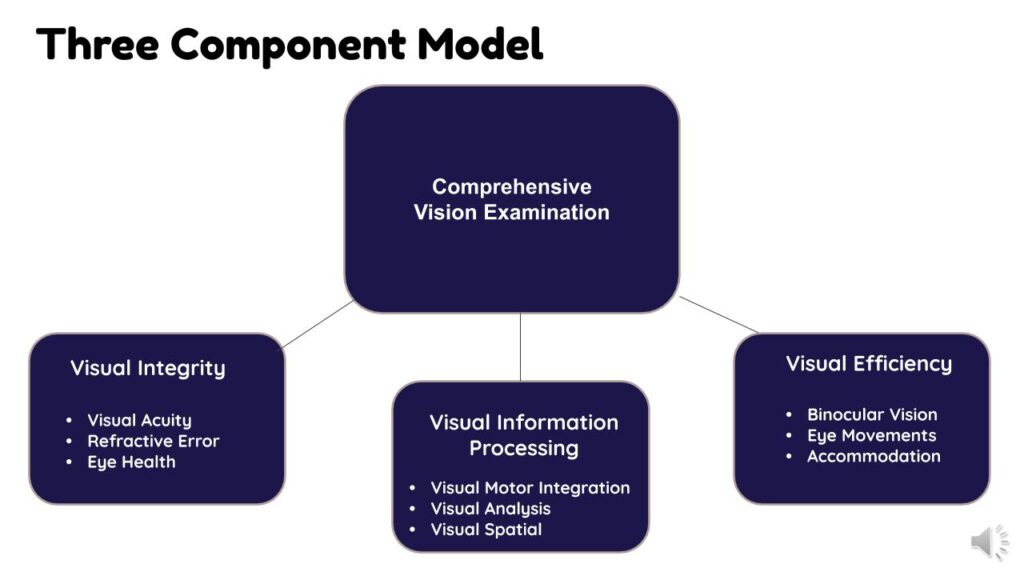 An annual eye exam done by an Optometrist may not include all three of these components.  It depends on the doctors training.  It can be difficult to find an optometrist who will do an exam that looks for more than just glasses.  But for some children, it makes all the difference in the world.

After all, it’s awfully hard to learn if you can’t see what you’re looking at.

Max’s mom listened to me explain the different types of eye problems that a complete eye exam would rule out.  “I had no idea that my Dr. may not have looked at that!”

She laughed ruefully. “Half of me is mad…. and the other half is hopeful”

I knew what she meant. Of course she didn’t WANT Max to have a vision deficit besides needing glasses.  But on the other hand – what if there’s been a hidden problem all along? 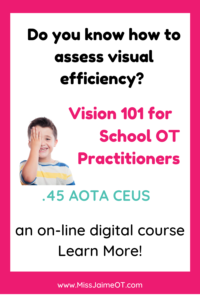