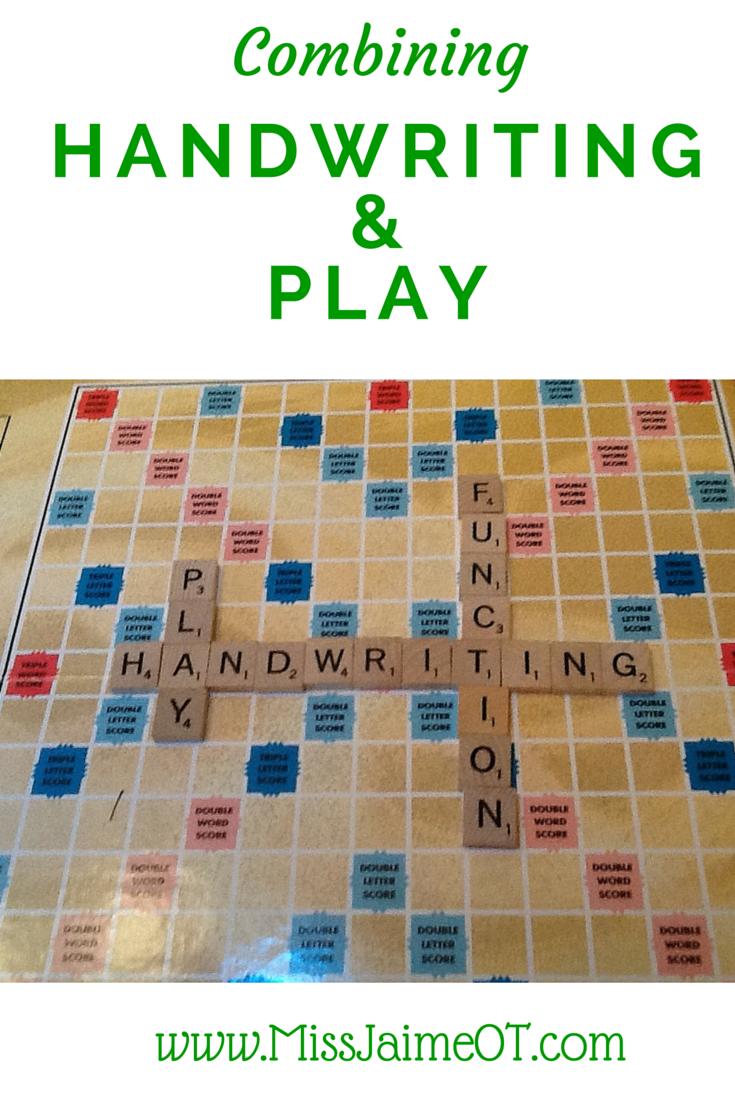 I am a firm believer that handwriting should be taught with formal instruction. Formal instruction means that a teacher teaches the children the name of a letter, what sound it makes, and models HOW to write the letter. A good solid handwriting program incorporates multi-sensory methods to help all children (visual learners, kinesthetic learners, etc.) gain the awareness of the lesson.

However, once children have been taught how to write the letter, they need to practice. Practice makes perfect, they say! Sometimes handwriting practice can be perceived as boring, but combining handwriting and play is a great way to keep it fun!

There are many ways to incorporate handwriting goals into playtime. If your child needs extra practice at home or you are a teacher who wants to find ways to incorporate handwriting into centers or playtime, there are many options. I love to incorporate classic games like hangman, tic tac toe, or bingo to address a child’s handwriting deficits.   For older children, board games like Scrabble, Scattergories, Boggle, Taboo, and Balderdash can all be adapted to include handwriting, too.  Games like Upwards, Banagrams, Pairs in pears and Apples to Apples can also be modified to include writing a list of the words used.  Simply change the directions of the game to include writing: make a word in Banagrams, write it in script, etc…

How to combine Handwriting and Play

Class instruction that includes Handwriting and Play is always fun.  Tic Tac Toe is the perfect game for combining Handwriting and Play to work on letter formation.  Simply set up a page with tic tac toe boards and write the letters that you want the kids to practice at the top.  For example, if the kids need to practice the letters a and d, they play with those letters instead of x and o.  Simple, but genius!  I would recommend some kind of visual explaining the letter formation to the kids on the page or on the board if possible.  This is just so the kids know that they need to write the letter properly.  It’s not a free for all!

Old-fashioned Hangman starts by writing the entire alphabet. Teachers can choose lowercase or capital, print or cursive.  This is a great way to get the whole class writing.  Parents can practice with a quick game after dinner or when you are stuck in a waiting room. Everyone is always tempted to pull out their phone during a few minutes of downtime, but it can be fun to combine handwriting and play.  Plus, nothing beats one on one conversation and connecting with your kid.

Word Scrambles are also an easy go-to handwriting game.  Write a short phrase on the board, “Happy Valentine’s Day!” or “It’s cold out!”   Children need to scramble the letters up to make as many words as possible using the letters in the phrase. This is similar to Boggle in that it lets children list words and word families, which is also a great review.

I often encourage teachers to create a “handwriting center” when the class breaks into groups.  In my classes, the teacher and the teacher’s assistant each take a small group of children for reading instruction.  The rest of the class work “independently.”   It is essential to consider the children’s level when choosing how to incorporate handwriting and play.  If the children need to work on sizing or spacing, independent work like the word scramble or a board game is fine. See the advice below for how to adapt for different ages.

However, independent work is probably not a good idea if children need to practice letter formation (how to write each letter correctly).  As I stated earlier, children really need to be taught how to write letters. Handwriting is not automatic, so handing out a worksheet or assigning a journal topic where children are expected to write letters they haven’t mastered is not the best practice. Playing a game that involves handwriting but doesn’t teach the letters isn’t an excellent idea for this handwriting goal.   If you do something incorrectly over and over, THAT becomes automatic. So why would we set our kids up to learn something incorrectly? We wouldn’t.

So, with that said, there is a problem.  How do we let the kids play a Handwriting Game if they aren’t being supervised or haven’t learned the letter yet?  It’s tricky, but it can be done!

1.   Break the activity down into one tiny skill.  Rather than working on all lowercase letters, work on two or three.  Break the letters into groups by letter formation – this way, the kids are learning ONE specific skill (how to write diagonal letters like v and w).

(Before you present an independent play activity that requires the physical act of writing, you should ask yourself, “Is this a reinforcement activity?  Have the children already mastered how to write this letter?”  If the answer is no, put it away. We don’t want the kids to practice the letters incorrectly.)

2.  If some children have mastered the letter and others have not set up a buddy system.  The Handwriting Without Tears Program incorporates a “write it and check it” into their handwriting pages.  The kids can do this with their buddy, as long as the group has mostly mastered the letter. Please make sure the kids know to check for how the letter is being written, NOT what it looks like.

3.  If they haven’t learned how to WRITE the letter, let them do other activities with the letter—for example, circling all of the “lowercase b’s” on a page with lots of letters.  The children aren’t physically writing, but they see the letter repeatedly, recognizing what it looks like and separating it from other letters.   Plus, it’s fun! The visual memory of the letter is really important.

4.  Don’t be afraid to combine technology with writing!  If your class has tablets or Ipads, set the kids up on a handwriting app! The tablet won’t let them write the letters incorrectly, so you don’t have to worry!   Use games on the smartboard that emphasize visual memory or grouping the letters, too.   The kids are having fun, but you are still combining Handwriting and Play.

*One piece of advice for handwriting apps and tablets, in general, is to set up “guided access” in the tablet settings so that children can’t change the app and do whatever they want.  They are often used to just changing whenever they feel like it.  You can set it up, so they are “locked” into the app.

1)  Make sure the kids know that they are working on handwriting while they play.   Often kids get caught up in the “play” part and they forget to focus on handwriting, too!  Have the kids submit their papers to you after the activity.  Make sure you check them, make corrections and hand them back. If the children see that handwriting matters to you, it will matter to them.

3) Use the opportunity to incorporate script if your student needs to improve in this area.

For more ideas for older children, check out these two blog posts about middle schoolers’ handwriting:

Do you have any great ideas to combine Handwriting and Play? Please share!